Watch: WazirX would play a crucial role in the evolution of the blockchain ecosystem: Siddharth Menon, COO, and Co-founder 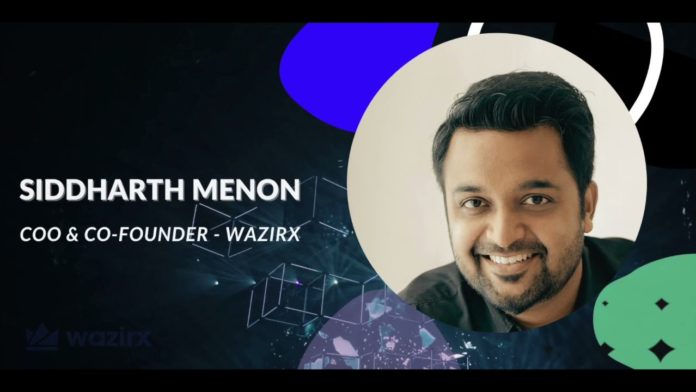 The crypto exchanges have a crucial role to play in the upcoming web 3.0 revolution as people are rethinking their businesses, said Siddharth Menon in the first episode of the video series started by Crypto Vakil. Menon is a serial entrepreneur and co-founded WazirX, the leading cryptocurrency exchange in the country which now forms part of the Binance group.

Web 3.0 is the next stage of web evolution where decentralized blockchain protocols will make content more accessible. In the current generation of the internet (Web 2.0), the data is mostly stored in centralized repositories.

“Exchanges play a sort of role what an ISP (internet service provider) did during the internet boom,” he said.

Menon said WazirX would play a crucial role in the evolution of the blockchain ecosystem similar to the role played by ISPs and later the mobile companies in offering access to the internet.

“Blockchain offers data transparency and security which can be used by the government for different projects including stamping and recording of land records. Blockchain as a technology can bring efficiency in the processes,” Menon said.

WazirX recently launched an NFT marketplace. On numbers, Menon said currently the NFT platform has 300+ artists and around 200-300 art collectors, and around $700K worth of sales since the launch. The gaming industry is considering tokenizing their in-game assets which Menon said is an important development.

Currently, the WazirX NFT platform is open to select artists handpicked by WazirX. On opening up the platform to more artists, he said, the team is working on a process (a voting system), where people can nominate creators who can list their NFTs.

Cryptos and NFTs currently form a legal grey area in India. On any dialogue with the government and regulators concerning NFTs, he said NFT is fairly an early market. “We are not bombarding them (government) with NFTs as of now, but we are more kind of working towards to have structure for cryptos in general and a lot of that can be used for NFTs as well.” He said the government, in general, is pro in understanding these concepts.

NFT space and cryptos have a lot in common and a crypto law if any can be inherited by most of the NFTs in the current form. But NFTs are in an early stage and a lot of experiment is going, he said.

On the proposed decentralized exchange (DEX) by WazirX, he said the team is doing final testing and audits and the DEX will be initially launching on the Matic blockchain. The DEX may not have deep integration with the centralized exchange of WazirX that is currently live.