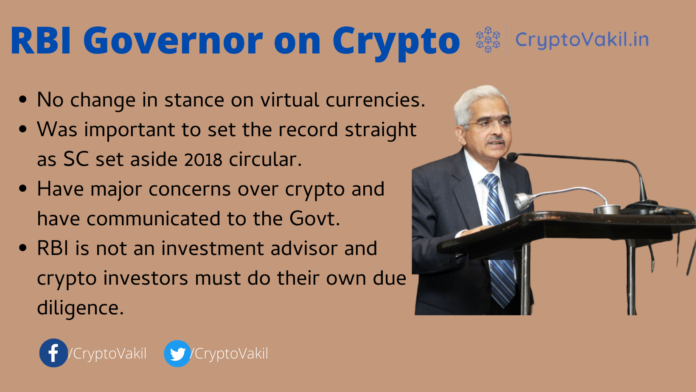 India’s central bank reiterated its concerns over cryptocurrencies, clarifying its stance just days after the regulator told banks and regulated entities not to cite the infamous April 2018 circular. The central bank governor was answering questions at an online press conference after the monetary policy statement this Friday.

“There is no change in RBI’s position……………….. We have major concerns around cryptocurrency, which we have conveyed to the government,” the Governor responded to the reporters. On the recent May 31 clarification, the Governor said, “we wanted to set the record straight – that the circular has been made invalid.” The circular was set aside by the Supreme Court.

RBI, however, advised banks and regulated entities to continue due diligence measures issued on existing regulations. Last month, it was reported that government may alter its hardline stance to consider regulating cryptocurrencies, instead of a blanket ban.

Answering a question on how investors should view the digital assets, Das responded that RBI can’t advise investors about their decisions and that each one needs to make their own appraisal before investing in virtual assets.

This is not the first time that central bank has expressed concern about digital assets . In an interview with CNBC TV-18 this February, Das said, “we have major concerns [about crypto] from the financial stability angle [that] we have shared it with the government.”

While the RBI has concerns about virtual assets, the central bank is already working on the digital rupee and is supportive of blockchain as a technology.