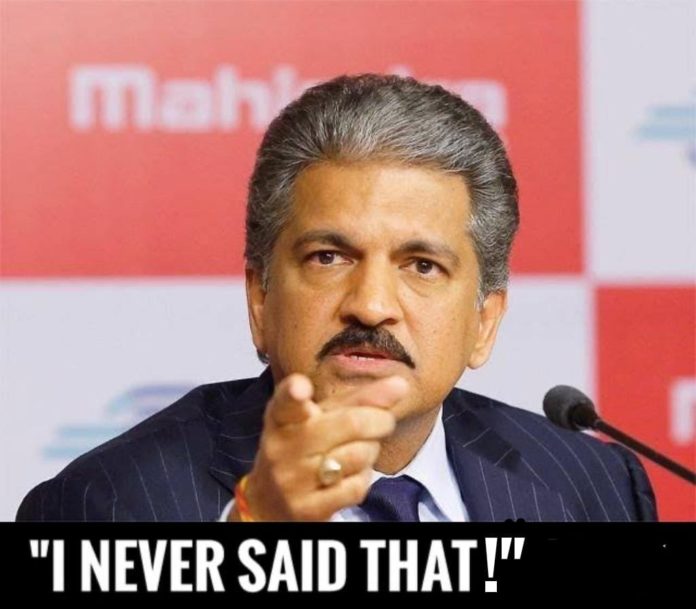 Anand Mahindra, the chairman of Mahindra Group on Friday clarified that he has “not invested a single rupee in cryptocurrency.”

This would be highly amusing if it wasn’t so unethical &, in fact, dangerous. Someone saw this online & alerted me. I need to make people aware that this is completely fabricated & fraudulent. Takes fake news to a new level. Ironically, I’ve not invested a single rupee in cryptos pic.twitter.com/cfWRDY1J88

The business tycoon expressed shock and shared screenshots of a fake news report, which claimed that Mahindra made huge returns from a cryptocurrency auto trading platform. The fake report cited a recent interview of Mahindra with a TV channel, where he said his number-one money-maker is a cryptocurrency platform called Bitcoin Era.

“It’s the single biggest opportunity I’ve seen in my entire lifetime to build a small fortune fast,” the article quoted Mahindra as saying. “I urge everyone to check this out before the banks shut it down.“

Mahindra called the ad completely fabricated & fraudulent. Responding to Mahindra’s tweet, Jay Kotak, the son of Asia’s richest banker Uday Kotak and the Associate VP of Kotak Mahindra Bank said there is an urgent need for regulation of crypto in India. The young banker said that there are no rigorous controls on money laundering, forex, or illegal payments. A bill regulating cryptocurrencies is expected to be introduced in the upcoming winter session of the Parliament.

This is not about whether crypto is good or bad, but about allowing a sub 10 year old “asset class” to operate under regulatory gray zone, while scaling with maliciously incentivised advertising, facilitating future disaster.

Crypto advertisements are everywhere these days from print to television to digital medium. Politicians across the parties have raised concerns and called for urgent regulation. Last week, PM Modi chaired a meeting to discuss the way forward on regulating the industry incuding the regulating the advertisements that over-promise and mislead the young investors.

On Thursday called for all democratic nations to work together on cryptocurrency. Speaking on the sidelines of Sydney Dialogue, the PM said that there is a need to “ensure it (crypto) does not end up in the wrong hands, which can spoil our youth.”